The goal of fake content is the same as fake news. To influence people’s thoughts and decisions. In modern days, doing this is surprisingly simple.

In the past year, we’ve heard a lot of talk about ‘Fake News’. In fact, it has become one of the favourite terms used by the current American President. Who, at the same time, is creating a lot of the fake news.

But “Fake News” isn’t only “news” anymore. It influences people’s decisions. On many different levels, elections only being one of them. The bigger problem is that most of us can’t see the difference between what is real and what is fake. This has always been the case, but it has become even more problematic with modern techniques. If you look at things from a wider perspective, we should all be talking about ‘fake content’. This is because content is a much broader term than news. And we are influenced, not only by the news but also by content. And a lot of content is ‘fake’ as well.

It’s been around forever

Some might believe that ‘fake news’ is something from the past few years. It isn’t. Creating fake content is something that has been going on for centuries. Millenniums even.

When I was in college, studying history, we learned about Plinius the Younger. This Roman senator wrote to emperor Tacitus about the eruption of the Vesuvius volcano at Pompeii. In his letters, he described what he saw, and how his uncle, Plinius the Elder, died a heroic death. As a historian, they teach you to not to accept what you read but question it.

By doing this, it turned out that we couldn’t trust all that Plinius wrote to be true. He wanted his uncle to ‘look good’. In fact, he almost said that himself in one of his letters. He told the emperor that he was grateful for the opportunity to give his uncle ‘immortal fame’.

As a result, some historians feel Plinius the Younger “juiced up” his letters somewhat. In his attempt to make his uncle “immortal”. The problem? The letters were a big source for historians to understand what happened in Pompeii. We ‘accepted’ some of the fake stuff.

One of the most stunning bits of fake content was seen during the 1930s in France, in the ‘Dreyfus affair’. A French artillery officer was sentenced to life imprisonment for treason. He allegedly had given secrets to the Germans. The head of counter-espionage, Georges Picquart, discovered they had jailed the wrong traitor. Instead of setting Dreyfus free, the government did all it could to hide their mistake. They created fake documents, letters and other types of content to cover up the mistake. In the process, they also made sure fake news was spread, to keep the public opinion on their side.

Propaganda has been part of the system for many years as well. Many dictators used it, the Nazis used it. And more recently we have the Iraq stories in the Bush administration. Here fake content actually led to a war. Most recently, we can also say that fake content contributed to decisions made around Brexit and the US elections.

Fake content is of all times. Yet, in current times, the problem seems bigger than ever. For two reasons. First of all, we are much more aware of it. Second, current techniques have made it simpler for fake content to reach us.

And it’s not politics alone where fake content plays a big role. We are constantly being influenced by fake content on commercial websites as well. With techniques that sometimes have existed for years as well. Advertising, bought retweets, fake followers, they are all part of the fake ecosystem. And how much do you trust Amazon reviews these days?

It has become very easy to produce fake content. You can say the process of creating and spreading fake content consists of four steps:

It looks a lot like regular content creation doesn’t it? That’s because it is based on the same principles.

You can also see Fake content in tactics like negative PR and SEO. When negative stories about a brand pop up, chances are someone is working on that.

And it doesn’t have to be content aimed at doing harm. Often, simple content that is used to push the awareness of a brand triggers a lot of fake content. There are a lot of white papers and research papers out there that are not based on any fact. A marketer has done some desk research or a company ran a poll. The results are then shared as ‘facts’. They are then shared across different platforms and different outlets. Until we don’t know what’s true and what’s not true anymore. The SEO world will definitely be able to acknowledge this.

It has become easy to make money from fake content. That means it will attract those that are looking for quick money. This includes, of course, the ‘good old’ black hat SEOs, but also criminals. Somewhere in between are those that are just in it for the quick money. And like in any industry that sees money flooding in, the middleman is popping up everywhere.

Fighting fake content isn’t easy. But it’s doable. There are some ways (that I’ll elaborate a bit more on in my talk at The Inbounder).

In an ideal world, there is no such thing as fake content. But we know that it has been around forever. It’s part of human nature. We also know how fast the current technologies are driving fake content. So we know the ideal situation of there being no fake content will never exist. We won’t be able to stop the creation of fake content anytime soon.

We can't rely on the Googles and Facebooks of this world. If we wait for them to come up with an algorithm that shows us what is fake and what isn’t, we are already too late. Yes, these platforms will develop something like this, but it’s a rat race. They will always be chasing those that are finding new ways of creating fake news. And we don’t want to put our faith into the hands of these platforms, do we? After all, they are ‘part of the problem’.

In his book “The filter bubble”, published in 2011 (!), Eli Pariser warns us. He talks about the ‘news’ that comes to us from Google and Facebook. Because of the way the algorithms are set up, we will only see the news that fits the way we already look at the world. Are you a Democrat? You’ll see more democrat websites in your timelines. Are you a Republican? Those democratic websites won’t show up, don’t worry. Why not? Because you hate them. So you don’t want to read them anyway.

But even if the filter bubble wouldn’t exist, we would create our own. People select what they mirror. We want to read and see things that are in line with our beliefs. Even if things aren’t true, we still believe them if they mirror how we think. It’s what keeps many Trump supporters on their feet. After all, we can always find proof for something we believe in. 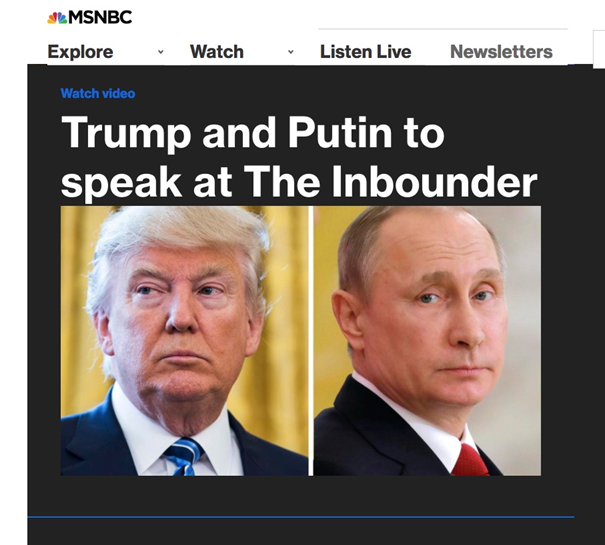 The earth was flat until someone checked.

It all has the same purpose: to influence the minds of the public in a way that favours their own goal.

Before we can talk about fighting fake content, we have to debate some things. One debate is the ethics discussion. What do “we” find to be morally “acceptable”? This discussion will take forever. And like with many moral issues, there will be those that are willing to “let things go” more than others.

The second thing we need to debate is WHAT fake content is and what it does. If we can come to a mutual agreement on it, we can start teaching about it. And when we teach about it, people will recognise it faster. And they will take more care in deciding whether or not to follow a certain direction.

Unfortunately, where we are now, is far from where we will be. We are only at the beginning of a fake-content-revolution. Modern technology is going to make sure we won’t be able to determine what is real and what isn’t anymore. And this is sooner than you think. If you think fake content is only about text, you are wrong. Soon we won’t be able to trust what we see or hear anymore. Techniques have already been developed that make it easy to ‘fake’ a video or audio. We can see someone talking and saying things that person has never said.

I’ll detail out much more what is possible and what is happening with fake content in my talk at The Inbounder in Madrid. But what is important to realise, is the essence of it all: the human mind and money.

We like to believe stuff. We want to trust what we see. Even though we often can’t. And with that, we take what we see for the truth. Even though it might be far from that. Smart influencers know how to play on the human mind.

They understand that news outlets don’t have enough money. That journalists don’t have enough time and that bloggers are lazy. What they are after, is traffic. As much as possible. So all you have to do is give them traffic. An article doesn’t have to be true to get traffic. It has to attract. The smart influencer is working on that instead of sending blogs guest post requests. But they’ll get there.

Once we start to understand the ecosystem and what it does to us, we might be able to fight it somewhat.

The fake content ecosystem has been alive forever, but if don’t start to become more aware of it, it will now take over our lives.

Bas van den Beld is a Digital Marketing strategist prized as Search Personality of the year in 2016. With a deep knowledge of Social Media and Content Marketing, Bas knows how to unite technical knowledge with the psychology of the users in a digital environment.

Awarded as EU Search Personality in 2015, is the founder and owner of “Speak with Persuasion” and Stateofdigital.com, which was named the Best European Search Blog at the 2012 EU Search Awards, and works as an online marketing consultant, trainer and conference speaker.